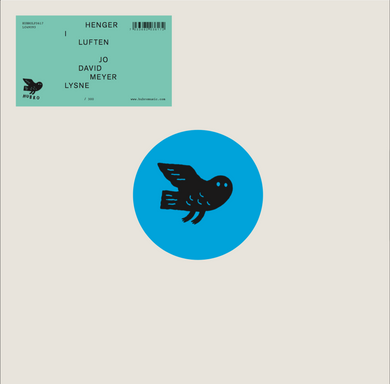 In one of the most striking debuts of recent years, Jo David Meyer Lysne’s ‘Henger i Luften’ (literally, ‘Hang in the Air’), magically combines the conversational fluency of contemporary chamber music with the extended sound-making techniques and alertness to the moment associated with experimental improvisation. The evocative, mood-enhancing atmospherics and tension-quickening rhythms of film music add another level, as does the contrast between the sonic purity of the mainly acoustic instruments and their sinister shadowing through subtle electronic effects. If you can imagine Morton Feldman scoring a Coen Bros movie you’re maybe halfway there.

Fittingly, ‘Henger i Luften’ really does seem to hang in the air, sounding as mysterious and dreamily insubstantial as the poet Rilke’s conception of music as “Air’s other side, pure, gigantic, and not for us to inhabit.” Over seven compositions and one collective improvisation, the sextet of performers creates a totally immersive listening experience characterised by intense close-up detail, where the scrape of a bow on strings or the exhalation of breath through a saxophone’s reed are captured so fully that they sound positively monumental, whether heard naturally or reconfigured through electronic processing into a kind of science-fiction space music, as in the magnicently moody final track, ‘Februar’ (‘February’).

Recorded in New Tone Studio in Oslo by David Alexsander Sjølie and produced and mixed by Jo Berger Myhre (Splashgirl, etc), the beauty of the instruments (vibes/bass drum, cello, viola, bass, saxophone and guitar) is conveyed with an almost super-real fidelity, while the addition of electronics draws into even sharper contrast the music’s dramatic play between light and shade, as if one is caught inside a massive audio landscape of mountainous peaks and troughs, towering sound intersected by deep valleys of silence.

Jo David Meyer Lysne (born 1994, Bergen), the young guitarist/composer who leads the ensemble and writes the seven tunes that together with one collective improvisation, ‘Uten feste’ (‘Without Anchorage’), form the contents of ‘Henger i Luften’, has previously recorded in a duo with the celebrated bassist Mats Eilertsen (on ‘Meander’, Ora Fonogram) and with Jenny Berger Myhre on ‘Lint’ (The Lumen Lake, Canigou Records). The music that became ‘Henger i Luften’, began, he says, in 2017 with a commission to write pieces to accompany silent films for a small festival in Oslo. “The ensemble was formed to play the music from the commission and the performance we gave inspired me to continue the project and make it stronger, writing music based on the concert but highlighting the sound combinations that worked best. It was really exciting to work with a sextet where all the members in some way extended their instruments with electronics, or played on acoustic instruments with synths, and also that they could have such a strong personal voice in both acoustic and electronic performance.”

The music from the initial studio recordings was then further reworked and rewritten. “I rebuilt the structures using the strongest ideas from the initial improvisations, producing/mixing/editing and adding more instruments”, Jo David Meyer Lysne continues. “What you hear on the album are radical transformations of what actually happened in the studio. Jo Berger Myhre then did an amazing job putting it all together, mixing the acoustic and electronic sounds really nicely.”

Whether despite or because of its complex origins, ‘Henger i Luften’ sounds satisfyingly all of a piece, as if it had been through-composed as a continuous suite from the beginning. It could even support an imaginary cinematic narrative, for this is a kind of dream music that invites the listener to make of it what they will. The instrumental textures are often so beautiful, and the combination of sounds so satisfying, that the album can even be treated like a soundtrack to one’s day and left to play over and over again, hanging in the air.