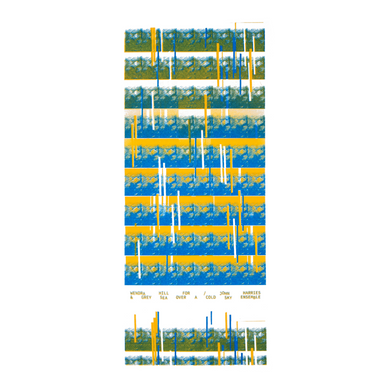 This split cassette presents two different takes on group improvisation with both acoustic and electronic instrumentation. Wendra Hill For explores close collaboration and communication in a small group setting, in conjunction with compositionally integral digital editing. Grey Sea Over A Cold Sky Ensemble is a larger group, working with broader gestures, the results presented here as performed.

The two groups are also connected personally by the friendship of John Harries and Jenny Berger Myhre, Jenny having released her first album, Lint, on The Lumen Lake in 2017.

Wendra Hill For is a Norwegian ensemble formed by Wendra Hill members Jo David Meyer Lysne & Joel Ring, exploring sound in both acoustic and electric landscapes through collective improvisation. Getting together with multi-disciplinary artist and composer Jenny Berger Myhre and energetic multi-instrumentalist Tobias Pfeil, the quartet recorded seven diverse sounding tracks in Oslo in December 2017 — including the brilliant flutist Henriette Eilertsen as a guest on two tracks. The quartet developed their musical communication through performing in Europe and touring in Japan during the spring of 2017.

The music was created by acoustic improvisation with instruments such as guitar, cello, clarinet, saxophone, flute, vocals, cassette tapes and effect pedals. The richness of the different textures created by the mix of instruments also inspired then inspired processing of the sound at a microlevel in post-production, building new compositions from small samples and events that happened during the studio session.

The Wendra Hill Collective is a forum where different personalities meet. The trust between the members is the most important premise of their music making.

John Harries and Grey Sea Over A Cold Sky Ensemble:

John Harries is an improvising drummer and electronic musician based in London, England. He is founder of the artists’ collective, live night and independent label The Lumen Lake, and plays in Rutger Hauser and Sea Songs, as well as making music on his own.

‘Grey Sea Over A Cold Sky’ is a semi-improvised piece for eight or more cymbal players and high-pitched instruments, based on a pictorial score and some simple instructions:

Cymbal players move from rolls with soft mallets, to free playing with sticks, to a simple pulse with soft mallets again. Other instrumentalists play small, fast sounds for part 1; long, sustained notes for part 2; then revert back to small, fast sounds again. This version was one of two performed around the same time by a group of friends and amazing musicians based in and around New Cross, South East London.

‘Tea, Coffee, Pepper’ was made at home by John on his own, with soprano sax overdubbed by his dad (the other John Harries) later on, and completes a pairing of pieces about the sea, and the feeling of being close to it.

“(On Wendra Hill For) Wendra Hill For arranges and processes its chamber, acoustic interplay blended with a subtle layer of electronics and assorted field recordings and yoga-sessions on vinyl and cassette-tape samples to a micro level in post production. The atmospheric, cinematic envelope on pieces like "Okroppslig” highlights this group’s search for its own sound – fragile, suggestive and detailed and its unique textures – mysterious, tensed and often melancholic and disturbing…“

”…(On Grey Sea Over A Cold Sky) This ambitious, 16-minutes work creates endless and untimely motion of waves of delicate and meditative resonating tones and overtones. It reflects in its own way a sonic landscape of grey sea and very cold sky, and brings to mind the works of Japanese percussionist Tatsuya Nakatani and his Gong Orchestra.“

”(On Wendra Hill For) Connecting lines to musique concrète, acousmatic music, and jazz improv are drawn in settings that see the participants freely exploring and interacting, and though a shared sensibility unites them, differences between the tracks are readily apparent. In “Utomhus,” where the tinkle of a music box collides with rustlings and noises of indeterminate origin, the music unspools like some creaking, broken-down machine. The rustic sawing of the bowed cello appears alongside the sci-fi swoop of a theremin-like instrument in “Okroppslig,” while “Omsonst” flickers and contorts through a field of guitars plucks and strums for two destabilizing minutes. In a suite of pieces that are less formal compositions than sound experiments, Wendra Hill For gives birth to a spidery music packed with tiny gestures and events…“

”(On Grey Sea Over A Cold Sky) With the performers working from a pictorial score and guided by simple instructions, the piece undergirds upper register squeaks generated by saxophone and violin with an impenetrably dense mass of cymbal rolls, the resultant effect not unlike a noisy improv drone The Velvet Underground might have spawned at one of its early live gigs. Halfway through, with the material having settled comfortably into a controlled roar, a lightning storm of sticks-produced cymbal accents appears to intensify the activity level and make the drone feel even more combustible.“